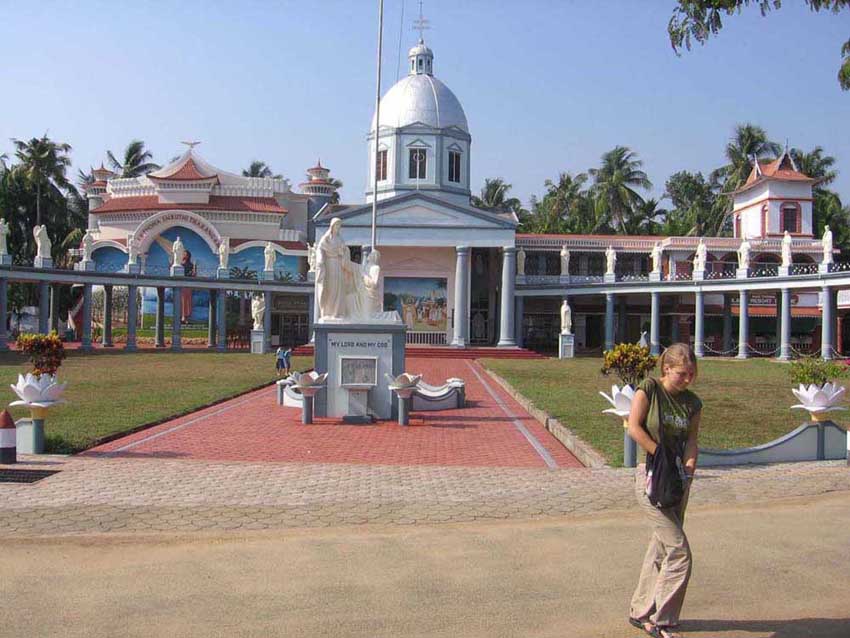 The impetus for starting an institution of ours at Kodungallur hallowed by the landing of St. Thomas was given by the late Msgr. George Alappatt, Bishop of Trichur. This was materialised by starting the Marthoma Pontifical Shrine at Azhikode in 1953. The dynamism of Bishop Clemens Thottungal, the then Provincial of Devamatha Province, made it possible to erect this beautiful Shrine in a short period of time.
The Sacred Relics of the right forearm of St. Thomas, the Apostle, was brought from Orthona, Italy, and enshrined here by His Eminence Eugene Cardinal Tisserant on December 6, 1953. Subsequently the Shrine has become a pilgrim centre. The feast of the landing of St. Thomas on 21st November, 52 AD, is being celebrated every year with great solemnity and devotion.
A chapel to commemorate the 19th centenary of the arrival St. Thomas, the Apostle, was built for the convenience of the faithful in 1972 at the back of the Shrine.
The Marthoma Hospital was started in 1978 for the benefit of the poor people. Though the Hospital was started only with the department of General Medicine, from August 1985 onwards, it started functioning as a specialised Centre for Mental Health together with the department of General Medicine.
In connection with the visit of His Eminence Simon Cardinal Lourde Swami, the Prefect of Oriental Congregation, some modifications were made at the Shrine. It was then re-dedicated by re-enthroning the Sacred relic in the new Repository on August 11, 1987.
A long cherished dream of this Pontifical Shrine was realised on March 05, 2005. It was on that day that Marthoma Smruthi Tharangam, Digital Show, was blessed, inaugurated and dedicated to the Indian Church, respectively by His Grace Mar Joseph Powathil, the Archbishop of Changanachery, Hon. Justice Kurian Joseph of Kerala High Court and by His Paternity Fr. Jerome Cherussery, Provincial Devamatha Province. This is being well accepted by pilgrims.