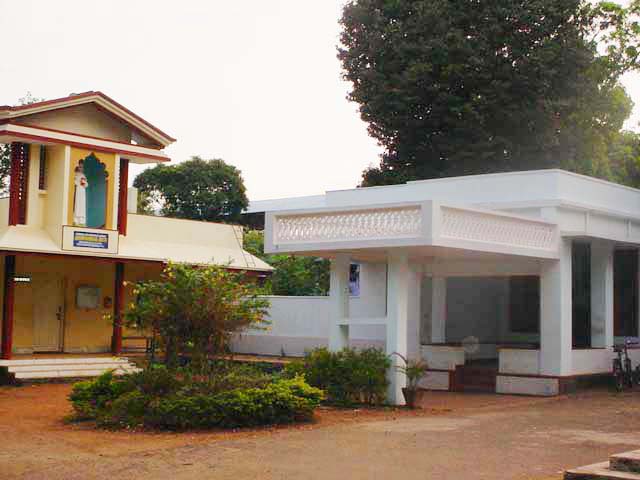 St. Kuriakose Elias Chavara laid the foundation of St. Mary’s Monastery, the second monastery of CMI Congregation, on 02nd February, 1858. The monastery was canonically erected in March 1864.
This religious house was the centre of catholic life and activities in the northern parts of Kerala for many years. In the second half of the 19th century the religious priests in the monastery here rendered illustrious service in defense of Catholic faith against the schismatic movements spearheaded by Bps. Rockos and Melus. For the first time in this region the Forty Hours Adoration of the Most Blessed Sacrament was solemnly conducted on 15 March, 1864. A Major Seminary for the Kerala Church started to function here in 1868. From 1927 to 1953 it was also the Novitiate House for the C.M.I Lay Brothers. St. Berchman’s Aspirants’ House was started in 1897. In 1914 it was shifted to Pavaratty, but it was moved back again to Elthuruth in 1946.

In 1891 an Industrial School was started, and in 1894 a printing press was installed as a part of it. From 1904 to 1915, a weekly, Pracheena Thara was published from this press. Later in 1968 the press was shifted to Thrissur. A primary school was started in 1889, upgraded as a Middle School in 1896, and as High School in 1933. Admission of girls started in 1990. In 1993 a Nursery School was started. A new school building was constructed and blessed on 11 September, 1995. A Boarding House for boys was started in 1889 and at present as many as 71 boys are boarded at a new building.
St. Aloysius College was started in 1968, and in 1985 co-education started in the College. Following the de-linking of Pre-Degree Course from colleges in Kerala, a Higher Secondary School was started in 2000 and a new building was constructed and blessed on 03 January, 2002. The establishment of St. Mary’s Parish in 1977 has added new dimensions to the apostolic activities of the house. A shrine dedicated to the Blessed Virgin Mary was blessed on 16 August, 1987 at Kariattukara, the boundary of the parish.
Of the many people who have laboured for the all-round development of this institution, Rev. Fathers Celestine Kodankandath and Mani Nidhiyirikal of Kuruvilangad deserve special mention